My Neurotypicals' Guide to SPD Picked as a Top 10 Post of the Year!

Friends! I'm so excited to share that my Neurotypicals' Guide to Adults with Sensory Processing Disorder was the SIXTH most popular post on The Body is Not An Apology in 2015! To honor this, they've re-featured the piece on their website: 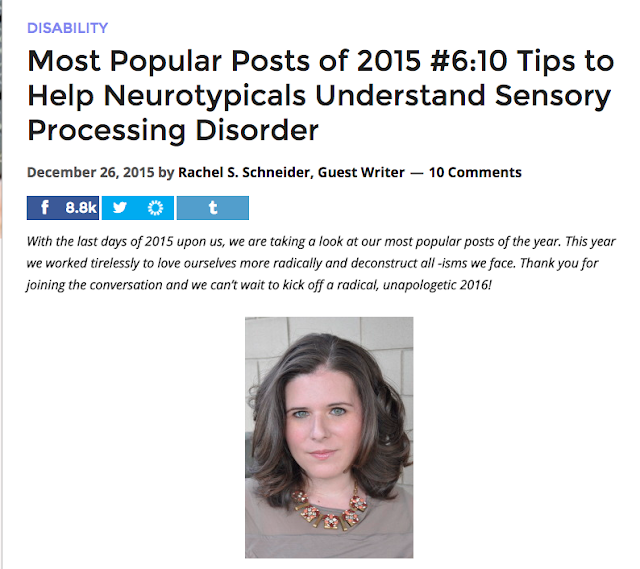 As many of you know, this is the article that inspired my upcoming guidebook, Making Sense: A Guide to Sensory Issues, which will be released on February 1, 2016 and is still available for pre-order on Amazon and Barnes & Noble. 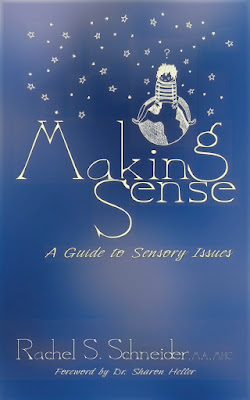 It's been an awesome year of advocacy, and I can't wait to see what 2016 brings. Thanks to all of you for the endless love and support!
Posted by Rachel S. Schneider at 8:11 AM No comments:

Email ThisBlogThis!Share to TwitterShare to FacebookShare to Pinterest
Labels: Coming to My Senses, Making Sense: A Guide to Sensory Issues, Rachel S. Schneider, sensory processing disorder, SPD, The Body is Not An Apology, the Neurotypicals' Guide to Adults with SPD

This one should look familiar to most of you loyal readers :) It's a blog post of mine from last winter about surviving the holidays with SPD Always a treat to have a post featured on The Body Is Not An Apology!

You can find the article here.

Posted by Rachel S. Schneider at 7:52 AM No comments:

Jack of All Excuses, Master of None

In what feels like another lifetime, and many years ago, I sat in my (now) ex-fiance's tiny studio apartment one evening and stared at his faux brick fireplace. Actually, "stared" is wrong, I attempted to bore flaming, angry holes into the wall with my eyes. It was late by my standards, way too late for any last minute surprises, and yet here we were, he and I, debating the merits of meeting up with two of his old college friends who "just happened to be in town for the night" and wanted to grab a quick drink and catch up. I was already in my comfiest of around-the-house clothes, having peeled off my work-casual attire hours before. I was unfamiliar with his neighborhood, as he'd just moved into the tiny postage stamp of an apartment to share a city with me. And did I mention that it was late and a surprise? It was late. And. A. Surprise.

This was about half a decade before I even knew that my rigidity and sensitivities had a name and a neurological origin, five years before I'd meet the man I was supposed to marry - the one who knew how to accompany me on my complex journey, and one year before I'd wriggle away from the well-meaning but undesirable clutches of the man who made my excuses that evening to some nameless college friends, a lifetime ago.

I can't remember if I sat alone and cried, terribly ashamed for my perceived shortcomings (most likely what happened), or if he popped down to meet his friends for just a few minutes while I calmly watched TV (highly unlikely), or what happened next, really. Time is kind and polishes even life's roughest edges down to a shine.

But the point is that for the first 27 years of my life, I was the Queen of Excuses. 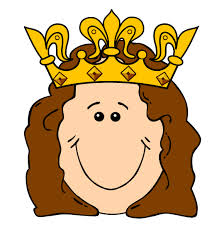 Holiday party? Doctor's appointment, sorry. Birthday dinner? Cousins are in town! Dance troupe performing in an abandoned warehouse downtown? Can't get over this damn flu. I kept a running list in my head of all of the reasons - sensical and nonsensical - that a typical human wouldn't be able to go places, and I accessed them like a pocket-full of candy: grandma died, cat is sick, menstrual cramps, slipped and fell, rescuing lost puppy, joined a cult, forced religious fast day, mild hypothermia from a brisk run in the park.

The truth was I didn't know why it was so hard for me to not only get around, but be around. I knew that there were many things that I didn't feel comfortable doing, and I didn't have the words to express why. I also knew that, "sometimes having fun in new and busy places is actually scary for me because it feels weird in my body and I want to hide and I can't see things and sound gets weird and I feel embarrassed and get anxious and want to negate myself" just wasn't going to cut it.

And so, from the outside and for most of my 20s, I was the busiest and most unlucky girl alive - always filled with plausible excuses for how I was spending my free time. I didn't make it to group gatherings, especially late at night, especially in unfamiliar and busy places. Instead, feeling guilty for lying and ashamed of being different without knowing what or why, I sat at my laptop in my comfiest around-the-house clothes and cried as I flipped through photos of my friends, my family, and my coworkers having fun. It was in these moments that my inner voice turned punitive. "What is wrong with you?" I said to myself, sharp and unforgiving. "Why can't you have fun for a change? Why aren't you normal?" Jealousy and self-hatred ran through my veins.

You'll be glad to hear that I'm no longer the jack of all excuses. These days, I know much more about who I am and how I'm wired. I advocate for people like me. Hell, I even wrote a book on the topic. When someone invites me to something I can't handle due to my SPD, I tell them so. If they've never heard of Sensory Processing Disorder, or sensory issues in general, I use it as an opportunity to teach them about my challenges. I even begin the conversation sooner, when I meet someone and we get to know each other for the first time, so that when they invite me to that midnight rave/flashing-light-parade/impromptu ironic sockhop, they're not surprised to hear that I'm not coming. With the truth, I've also freed myself from the pit of shame. I no longer have to make excuses for being different, for being me.

Friends, I'm proud to share my latest article for The Mighty, a news-media website dedicated to sharing stories about disabilities, disorders, mental health issues, and the human spirit. I chose to write about an experience that many of us in the greater sensory community deal with on a regular basis, and the ways in which we can all work together to change this experience. 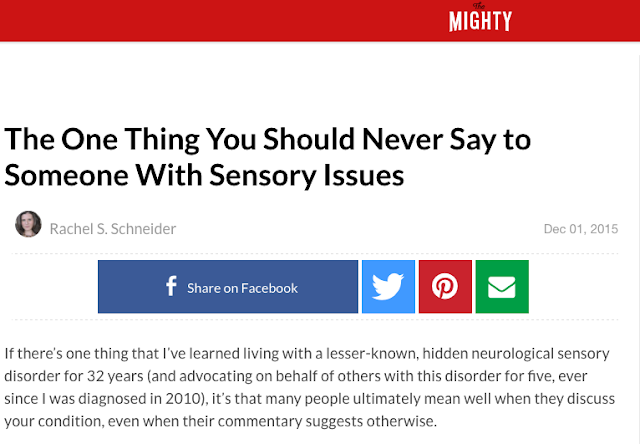 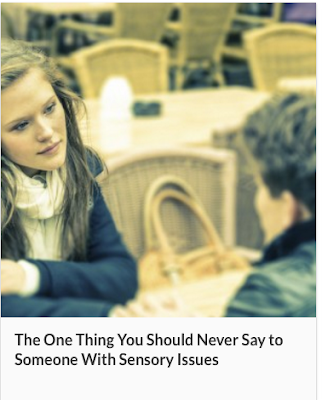 ****Shameless Self Promotion: Want to learn about SPD from a delayed-diagnosis sensory adult's perspective and hear more from yours truly? Pre-order Making Sense: A Guide to Sensory Issues today!
Posted by Rachel S. Schneider at 7:51 AM No comments: