For someone who shirks loud noises and keeps different decibel earplugs on her person at all times, I am a very loud speaker. With my viscous, deep, and hazy voice and high energy level, my words often stumble out from between my lips in a clamorous barrage - a well-thought-out flow of booming, high-octane ideas. It's just who I am, who I've always been.

In the summer between my fifth and sixth year, I went to day camp for the first time and spent eight hours a day outdoors squealing and chatting and singing with my new friends. It was the summer I learned to spell chicken thanks to a ragtime song about paying rent and Judgment Day and played my first hand of Miss Mary Mack. Old home movies of the time show me in performing mode 24/7, ready to steal any moment in front of my parents' chunky 80s video camera and grace the world with my melodious presence. With my thick bangs brushed out and my hands neatly folded, I sang. I sang Doe a Deer on the back deck of my family's country house, wheezing every single syllable as I demonstrated where in the scale each note would fall (the last "doe" was a leap into the air). I sang Day is Done from the stage of my unfurled bed, minutes before bedtime, in a pink nightgown. I sang Down by the Bay over morning meals of english muffins and melted cheese. Breakfast theater.

As the summer faded, so did my voice. My once high-pitched girly squeak was replaced by a croak and honk not unlike that of a 12 year old boy undergoing puberty. And yet still I sang The Cat Came Back as I pretended to prepare an elaborate meal from the bathtub, and Miss Sue (from Alabama) as I lugged my lunchbox into the first day of first grade. By then, my voice had begun to weaken, but this didn't phase me. In the playground, I taught my new friends the words to every song I'd learned over the summer, eagerly correcting the melody as I pumped my legs on a tire swing. All was well until music class. Lead by a petite, strict woman, our new music classroom was filled with enticing instruments, like the glockenspiel, which I adored immediately almost as much as singing. (Even back then, rhythmically slamming mallets against metal slats was appealing, of course.) But I was most interested in singing. I had a gift for carrying a tune, I just didn't have the vocal power. I loved the new songs I learned in school about kookaburras and sakura - even songs about the thin, French pancakes called crepes (can you tell I went to an international school?) By the late fall, I had sung myself completely voiceless. My parents took me to an otolaryngologist who said I had nodes on my vocal chords, and I swiftly started speech therapy. Turns out I had somehow forgotten how to speak properly, and I had to retrain my vocal muscles.

Leave it to an SPDer to blow her voice out completely. 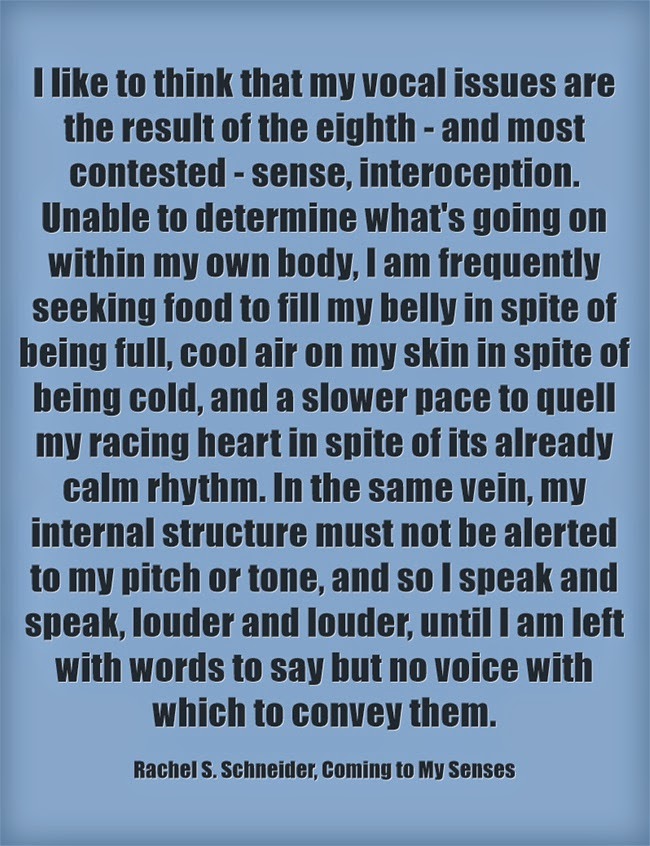 I went from speaking in class to writing things down, from singing in music class to playing the triangle; the sad, sullen ping a reminder that even the little bend of metal had its own voice. In speech therapy, they told me to breathe and speak like I had a bird sitting on my shoulder. It was Halloween, and all I could think about was donning my princess costume and begging for peanut butter cups. Through gestures.

My voice eventually returned, but it had morphed quite dramatically. In high school, a beloved drama teacher - a woman known for her crown of billowy, white hair - once told me that it took many famous movie stars years of smoking and drinking of dark whiskey to establish a voice as mysterious and evocative as mine. In college, friends asked me to speak on their campus radio shows, and in my 20s, I found that my rasp was alluring to even the most elusive male. I used to call my faux radio show W-RACH, FM, home of Rachel's smooth, smooth voice.

And then, three weeks ago, my voice disappeared again. I won't say it was a complete surprise. The tug of adulthood and its myriad of responsibilities and stressors does lead to many discussions and debates. When I am stressed, my SPD goes unchecked, and my senses are more apt to falter. I like to think that my vocal issues are the result of the eighth - and most contested - sense, interoception. Unable to determine what's going on within my own body, I am frequently seeking food to fill my belly in spite of being full, cool air on my skin in spite of being cold, and a slower pace to quell my racing heart in spite of its already calm rhythm. In the same vein, my internal structure must not be alerted to my pitch or tone, and so I speak and speak, louder and louder, until I am left with words to say but no voice with which to convey them.

The ghostly croak and honk from my childhood sits with me now, my throat familiarly achy in a muscular deja vu. I am once again about to start speech therapy. My work supervisors have been generously speaking on my behalf. Last week, my husband pressed a tiny bell into my hand to summon his attention - it's not unlike the ping of my childhood triangle. Nothing to me is lonelier than the spill of thoughts without verbal release.

In my head, my thoughts race with no escape. At least this time I have this wonderful blog to give me a voice when pitch and tone won't cooperate. At least I know that you're listening.
Email Post
Labels: Coming to My Senses interoception Rachel S. Schneider sensory sensory processing disorder SPD vocal chords vocal issues voice