Yesterday, I resolutely stood with my husband on the corner of Crescent Street and 42nd Road in Queens, New York, in the thick of a crowd of spectators with a red banner in my hands. In supportive black lettering, it read YOU ARE STRONGER THAN YOU THINK! To our right, an impromptu live singer and his garage band yowled the lyrics to every song I've ever caught myself humming under my breath: 867-5309, Centerfold, Every Little Thing She Does is Magic. To our left, a host of cowbell ringers kept their own rhythm, and before us, rippling like a neon sea, was a ceaseless surge of marathon runners. Some tossed green paper cups at our feet as they shuffled past one another, their names emblazoned across their chests, their paper bib numbers flapping against the forceful November wind. I was locked in a sensory menagerie. They were at mile 15 of 26.

Flanked by my husband/handler, I managed to wiggle my way through the somewhat stationary torsos and legs of onlookers to press myself against the thin, pink tape delineating marathon route from cheering section. This maneuver was crucial: my incredible younger sister was somewhere among the undulating forms passing by and I was the keeper of a vanilla energy gel that required a skillful hand-off. Plus, I wanted to give my superstar a hug.

As the drummer signaled the start of yet another song, I painfully squinted through my blue-tinted glasses out into the abyss of bobbing forms and shook my sign uncomfortably. I caught the eye of a woman who looked defeated and forlorn, whose running had slowed to a stilted jog. In spite of the unseasonably cold temperatures, her forehead was glistening with sweat. She weakly looked down at my sign as she passed and back up at me. "I can't do it" she mouthed as she trotted past my shadow. She looked like she was forcefully holding back tears. "YES YOU CAN!" I shouted from the sidelines. "YOU ARE STRONGER THAN YOU THINK!" She mustered a weak smile, turned back towards Crescent Street, and picked up her pace. I had the same interaction with a man in a striped hat a few minutes later, and a few minutes after that, a pair of women in matching yellow shirts.

Easy for me to play sidewalk Yoda standing pretty on the street corner. I wasn't running a marathon. Stronger than you think, you are. May the Fartlek be with you.

As a fifth person glanced down at my sign and back up to my face with a grin, I realized something important. We're not all that different, those marathon runners and I - marathon runners and adults with SPD . . . marathon runners and anyone with a hidden disability, really. What's a marathon after all but an arduous, long-distance race? It takes dedication, focus, and drive to train for it, and it takes superhuman courage and confidence to complete the route.

SPDers know a thing or two about superhuman courage and confidence.

Imagine stepping foot into a world every single day in which the things people normally take for granted - sounds, sights, smells, tastes, movement - are warped and unapproachable. Envision lunging away from an oncoming subway, hands pressed desperately over your ears before the commute to work even begins. Picture the myriad of faces across the platform, the jerk and thrash of a train as it pulls into a new station. Notice the ceaseless hum of fluorescent lighting above your desk, the sound of Debbie from Accounting who sneaks up behind you each morning and cries "goooood morning, sunshine!" and the unidentifiable smell of lunch wafting from the company kitchen. Now pretend that each hurdle - every tiny sound and sight and unexpected burst of conversation - doesn't send you into an emotional, physiological tailspin of detachment, clammy hands, and racing heart, and deny the recitation of haunting, ancient mantras of self doubt. Work as if that's all you're focused on. Visualize passing on plans at the end of each day because you're bone-weary from seemingly benign things - brushing your teeth, picking up groceries, contending with sensory activities great and small. No one else sees that in actuality, you're actively engaged in keeping calm and reaching the finish line. 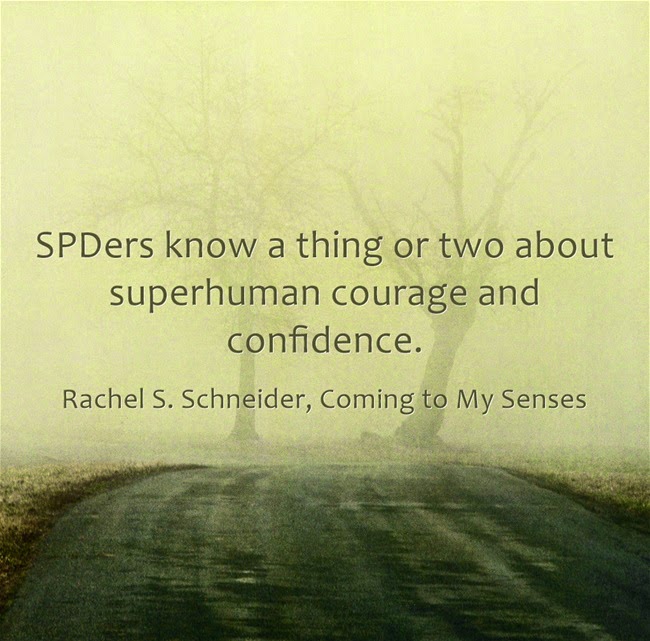 We are constantly running, we SPD adults. We are in perpetual motion, vacillating toward and away from sensory stimuli in all areas of our lives.  Our silent sensory marathon begins the moment our bedside alarms wail and we startle out of sleep, sometimes shaking and tearful, and ends the moment we slip back underneath our weighted blankets and curse the tiny ants that march underneath our skin for keeping us wide awake. We push ourselves to the brink sometimes doing the things that most people take for granted. We do them because we have no other choice but to run the route of our lives, in spite of our differently-wired brains. We must keep pace with our fellow humans. We actively want to meet our goals.

And so perhaps this is why, smashed between strangers and gazing outwardly at the carnival of sights and sounds and motion, I so actively shook my sign and tried to meet the runners' eyes in spite of my own discomfort. I had a very important message to share with those whose belief in themselves and their abilities had momentary lapsed.

We are stronger than we think. Take it from someone who knows. 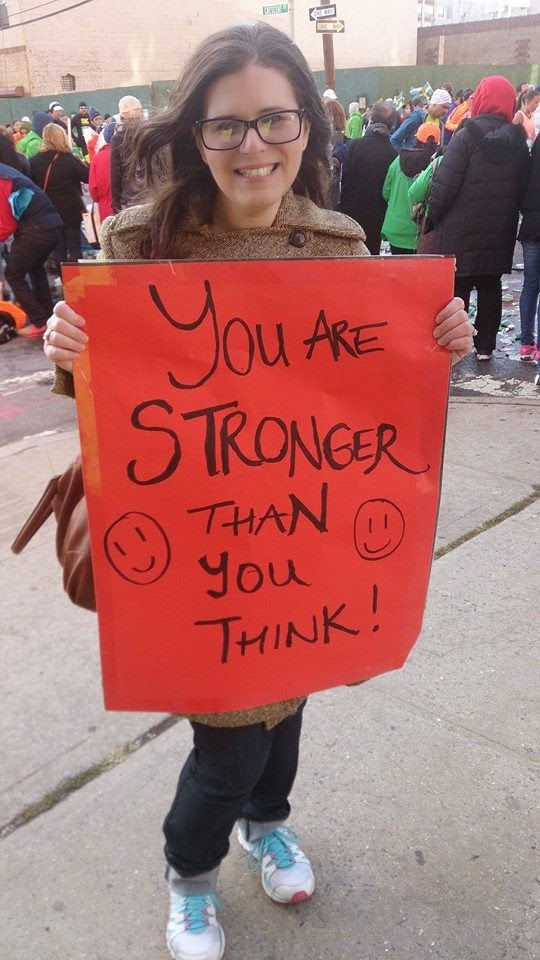