Read.
Print.
Hand out to family and friends over the holiday season.
Tack to the fridge.
Recite from memory.
Toss by bucketfuls from the top of your town's tallest building.
Repeat.
SPD is simpler to explain than we think.
**


Q: WHAT IS SENSORY PROCESSING DISORDER?

A: Familiarly known as "SPD," this hidden ("invisible") neurological condition impacts a person's ability to filter, process, and respond to sensory input.

A: Depends on the person. There are eight senses and children, teens, and adults with SPD struggle with a unique combination of aversions to and cravings for specific sensory input.

A: Being exposed to the wrong combination of sensory input can leave a person with SPD feeling quite uncomfortable. People with SPD often describe feelings of fear, detachment from the situation or their body, distraction, agitation, frustration, sadness, anger, and a discomfort so great it can mimic pain or actually come across as pain. Secondary feelings of embarrassment or shame are also common, especially in teens and adults who believe that they "should" feel and behave in a particular manner more commonly accepted by society.

In the presence of the right combination of sensory input, people with SPD can feel calm, centered, engaged, grounded, peaceful, strong, and able.

A: This is a question still being answered by the medical community. Researchers at UCSF Benioff Children's Hospital San Francisco were the first team to map the biological underpinnings of the disorder. Future studies will help us understand more about SPD and the most effective treatment methods. 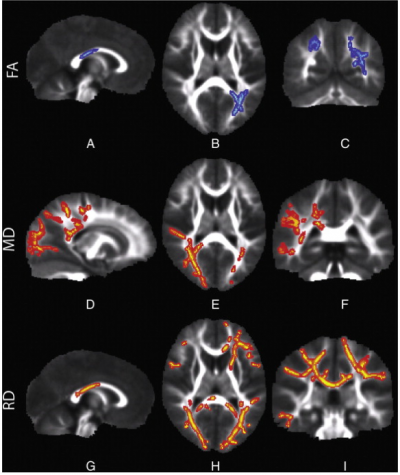 A: There is no "official" SPD diagnosis at the moment. This is due in part to the disorder's current standing in the medical community. In time, it will be more easily diagnosed by medical and psychological professionals. An occupational therapist (OT) can evaluate children, teens, and adults for SPD. If you suspect that you may have the disorder, reach out to a local OT for more information. Some psychotherapists (psychologists, mental health counselors, social workers) are also beginning to understand SPD as well, but they currently do not have a tool for evaluation.

A: Most people with an Autism Spectrum Disorder (ASD) also have SPD; most people with SPD don't also have ASD. Thanks to a 2014 UCSF study, we now know that SPD brains are wired differently than brains with ASD. 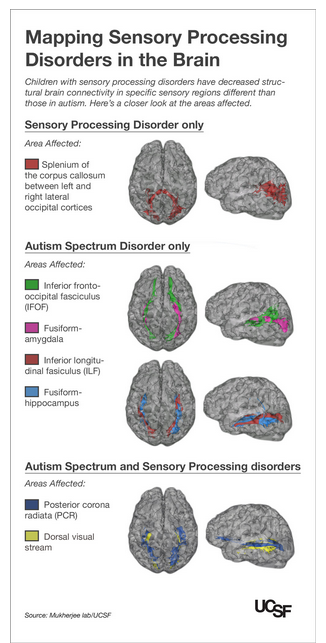 People with ASD are frequently sensitive to sensory input in the same way as people with SPD, but there are also other symptoms, including deficits in social communication and interaction that are uncommon in SPD.

A: Children with SPD receive occupational therapy. These exercises and tools help them rewire their quickly growing brains. Adults with SPD often seek a combination of occupational therapy, psychotherapy, and physical/visual therapy to tackle the complexity of the disorder in adulthood.

When caught early (childhood), occupational therapy can supremely reduce the impact of SPD. When caught later (teenagehood, adulthood), some of the SPD symptoms can be alleviated through tools and exercises, but the disorder will continue to be more of a concern.

Because the final stage of brain development occurs around age 25, it is impossible for older adults with SPD to rewire at the same rate as children, and treatments for adults will only be effective to an extent.