Bearaby's Napper: The Weighted Blanket That Holds Your Hand

*with a weighted blanket.

Yes, you heard me. I'm in love with a weighted blanket.

A few months ago, the good people over at Bearaby asked if they could send me one of their weighted Napper blankets to review. I should first mention that I'm a decade-long connoisseur of weighed blankets and other weighted things. I own two weighted lap pads, two weighted blankets, a weighted scarf, a weighted stuffed animal, and two weighted sleep masks. Basically, if it's weighted, I'm game.

Like a good little student of life, I googled "Bearaby" and up popped these beautiful, colorful woven blankets. There they were in shades that sounded delicious: Butternut Bliss, Evening Rose, and Moonstone Grey - casually sprawled across modern couches and cozy armchairs that I'd give my right arm to own. West Elm features them in their store. HGTV and Insider reviewed them.

I skeptically looked up from my laptop and scanned the room, as if clearly they intended this email to go to someone else, someone cooler and luckier than me. Realizing I was alone (and it was, after all, my inbox and my laptop), it hit me that they were actually talking to me. They wanted to send me something beautiful and useful to try. My opinion in the social sphere mattered.

And then it hit me:

I've somehow become a sensory influencer! (Listen closely, and you might still be able to hear my squeals of delight all the way from NYC). Only took a decade of hard work.

But back to Bearaby. They wanted me to weigh in on their Napper (weighted blanket pun not intended, but digging it anyhow) as an adult with SPD and write an honest review. And if you know me, you know I'm always up to the task of checking out something that could enhance my sensory life and yours. I think I emailed them right back saying YES, HOW QUICKLY CAN YOU SEND IT?! I was told to choose a shade (Evening Eggplant - a rich, fall shade of purple) and sit tight.

A few days later, my daughter's nanny dragged in a massive box behind her. It's HERE! she exclaimed, as excited as I was. I ran to the box and immediately sliced it open. I was expecting to see my new blanket peeking out at me, but instead there was a cream-colored cotton (muslin?) bag with self care tips. I took a million pictures because I always take a million pictures. It was so enticing. And then I unlaced the bag and out peered my new blanket.

My daughter's Elmo was an immediate fan too. 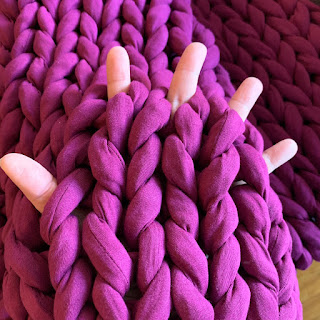 Finally, I pulled the blanket out of the bag. From the photos, I expected something that felt knit, like the sort of thing someone called Aunt Maude would make you during a long, sickly winter - except weighing as much as a one-year-old. But instead, it felt like thick, cool cottony ropes. I pushed my fingers through the weave and stared at my hand, fascinated by the whole thing. I'd never encountered a weighted . . . well, anything . . . quite like this. I squeezed the strands. They felt like pressing my fingers against a stack of t-shirt fabric. There wasn't a bead in earshot.
I was totally baffled and had to ask what made it so heavy, and it turns out they hand-knit each blanket, adding layer on top of layer of organic cotton, so it's naturally weighted. I took a nap on the couch later that day, and I dragged my new 20lb friend over me. Instead of hovering at the curve of my hip, like a tent, the blanket eased over every curve and line of my body. I felt the fan's breeze blow gently through the open weave - I even had to put on a sweatshirt! (No sweating - a weighted blanket first.) And yes, I felt a little like a fish caught in a net at the beginning, but then I laced my fingers through the weave and realized the blanket's best feature might, indeed, be this:
It holds my hand. 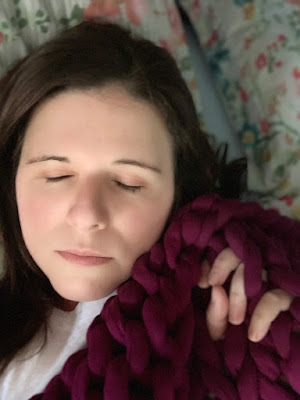 Anyone who's ever read my blog or my books knows my obsession with hand-holding. Nothing makes me feel safer or more connected to the world around me than holding a trusted person's hand. The weave - weighted magically as it is - somehow squeezed my fingers back. Not only was my whole body receiving proprioceptive input, every single finger was as well. I felt peaceful - and then I fell asleep.
This continued over the next few weeks. Given any opportunity to nap, I grabbed my Napper. Yes, I could've easily used this blanket for nighttime sleep too. But I'm a weird creature of habit and wanted the soft, fluffy texture of my current weighted blanket to stroke as I slept at night. And so, my Napper has become my go-to naptime blanket. It's also seen me through one particularly ugly meltdown and one meltdown that I circumvented entirely, thanks to this blanket. (Sprawled out on the ground in my famed "Hit the Deck" style under my Napper, I was able to recover quicker than ever before.)
It's also my favorite weighted blanket to share with the ones I love. Instead of melting under the weight of a blanket plus the furnace of shared body heat, we're never uncomfortable together under the Napper. It makes the perfect snuggle-up-together-and-watch-TV-from-under-it companion. 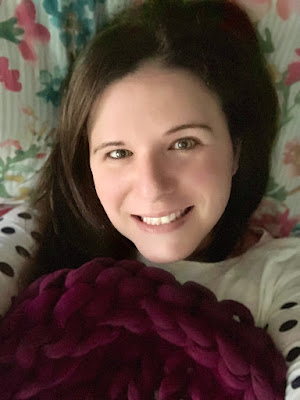 So, thanks Bearaby. Thanks for creating what has to be the most visually-beautiful and uniquely-designed weighted blanket on the market. Thanks for naming your creation The Napper, because we all deserve a break to rest sometimes - especially under the delicious weight of this blanket. Mostly, thanks for finally developing a tool that holds my hand. 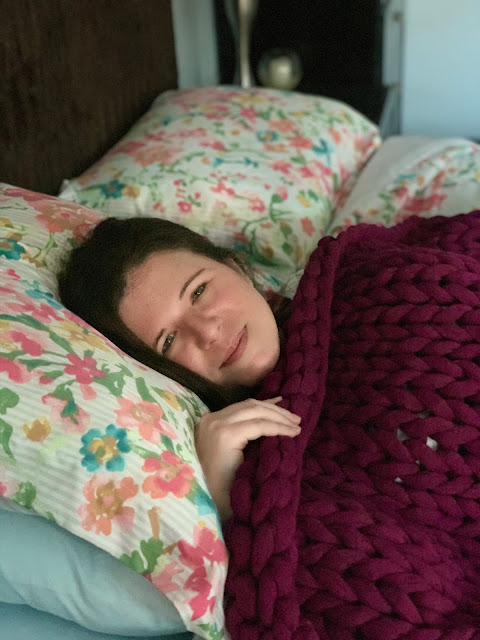