Hours before the dawn ever considered breaking, my Handler and I arrived at the airport on what was barely a Saturday, our carry-on baggage in tow. I hadn't flown in a few years - hadn't moved through the cavernous, blinding terminal or walked the long, unstable plank to the plane's tiny hatch door - and so, as you might expect, I was particularly anxious. Because it was so early (or perhaps "because it was so late" depending on your Friday night going out tolerance), my senses were already particularly challenged. Half asleep and unsteady, I played Follow the Leader with my husband as he moved through the rotating airport doors. He moved his left foot, now you move your left foot. He walked to the right, now you walk to the right. Good girl. I dragged his small suitcase behind me like a toddler blanket.

And then I looked up. In front of me, more than eighty people long, was one of those long, snaking lines people sometimes call a "queue" leading up to the security checkpoint; a maze writhing with yawning children, chatting friends, and unkindly officers ushering passengers through shifting elastic barricades. 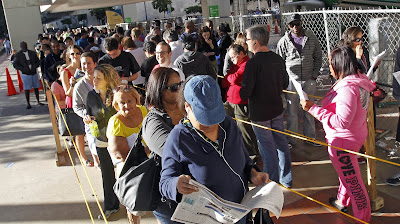 And I hear what you're saying, dear reader, Oh, but Rachel, no one likes a line. And yes, barring some eccentric Linear Awaiting Expert, whose sole mission in life is to strategically assess the motion and positioning of lines by standing on as many of them as possible, most people don't like lines most of the time. I'll give that one to you. But if neurotypicals don't like lines; especially snake-y, queue-y ones; people with sensory issues can't stand them.

Imagine, if you will, that you are being punched in the face over and over and over by some random invisible assailant. You spend most days in this state, somewhat uncomfortable and somewhat irritated, and so you're logically used to the abuse of your unique neurology. But today, it's especially early. The lights are blindingly bright. The hallways echo. Shoes squeak menacingly against the slippery floors. You are not only uncomfortable, you hurt as each knuckle crashes into your poor assemblage of a nose and tender eyes. Now picture you're being punched as you're waiting in line. You're roped into a loopy, pre-set path, and society requires you to continue forward in order to get where you're going. The assault to your being will only lessen at the end of the line. You need to keep an eye on your luggage as you try to protect your aching ears. You need to escort your body forward even as your skin is bruising and your bones begin to ache. You need to discern the distance from yourself to your assailant, from your assailant to the next person in line so that you're not given sideways looks by strangers as you plow directly into them. You hear snippets of their conversation, even as you are clocked in the chin, and with each twist of the line, new snippets and new strangers are sent to march beside you, blocked only by a thin rope. The visual array of people in controlled-motion, moving in the pre-set space allotted, is overwhelming.

If you feel like getting out of the line, you can. This is America after all, and you're not legally required to be on this line or any line. You can step out of line and take a sensory break. You can hail a cab and go the hell home. You can run up and down the entire length of the airport vestibule clutching pinwheels and whistling dixie. But if you want to get to Point B, to the place you need to go, through the metal detector to your terminal to the plane with the seats that you booked to your destination, you must stand in this line. You must move through it, even as you plead with your sensory assailant and pray that no one notices the extent of your seemingly inexplicable discomfort, because there's nothing worse in a moment like this than starting the diatribe that begins, "My name is Rachel and I have a neurological condition called Sensory Processing Disorder." Like so many things in life, the only way out is through.

You know I made it through because you know we always make it through. My reward for surviving the queue was getting to be here for a few days: 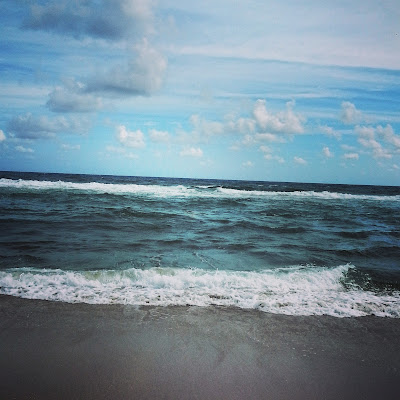 Be still my heart

That's the thing about life with SPD. Short of having a shutdown on live train tracks or a meltdown midway through a skydive, you always come out alive. But the unseen battle deserves to be highlighted too. We owe it to ourselves to explain our struggles (and successes) with the seemingly inane so that we can better understand why we behave the way that we do, and people without SPD will only understand our inner-workings and our hidden challenges when we cast them into the spotlight.

Let's celebrate even the smallest things. This week, I survived the thrash and flail of two long, snaking lines. That surely deserves a gold star.