I'm Thankful for YOU

On my blog's Facebook page this morning, and in honor of Thanksgiving, I shared a note of thanks with many of you. Here it is again, just in case you missed it. And I mean every single word.

I am incredibly ‪thankful‬ this year. When my Neurotypicals' Guide came out on The Body Is Not an Apology in late December 2014, I had no idea what it would mean for me in 2015. And then in March, Sensory World asked me to write a guidebook modeled after the article, explaining sensory issues. I'd dreamed of writing a book ever since I was tiny, and in a single moment, one of my oldest, most deeply-held dreams came true (and it's due out this coming spring! WOO!) After that, this year of ‪#SPD‬ advocacy and education caught on fire. I have absolutely loved working with the Sensory Processing Disorder Foundation, SPD Parent Zone Organization, and The Sensory Spectrum on all sorts of conferences, articles, videos, and projects, and it's been an honor advocating alongside some of my favorite members of the greater sensory community, namely Eating Off Plastic, Annetta Nesler - Songstress, SPDlife.orgspdlife.org, and Chloe Rothschild.

What am I most thankful for, though? YOU. Every single one of you. I continuously can't believe that you not only let me tell my story, you applaud it. You even seek it out. You leave me notes here and on my blog. You email me and message me. You open up to me and share your innermost secrets and fears about your sensory self and your sensory children. You let me laugh with you and cry with you. You let me cheer on your triumphs and sit with you during your challenges. 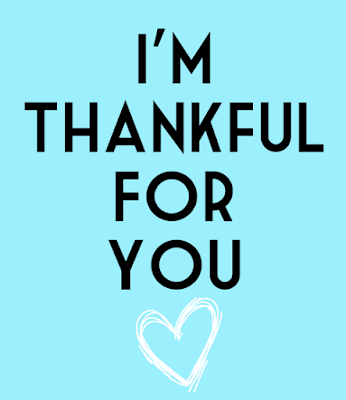 I used to wonder why I was so different and why I felt in constant retreat from the world around me. I was quietly angry and disappointed with myself for what I perceived to be my shortcomings, and at times, I even hated who I was and mourned who I could never be. I now know that I was just in training for the future, for a time when I'd need to step up to the plate and speak my mind about the very thing that made me who I am. I was learning how to be proud of my differences in ‪#‎neurology‬ and to demand the respect that I deserved as a human being, regardless of the very same differences. I was preparing for this - the book, the blog, the articles, the conversations - all of it.

I was getting ready for you.

Thank you for being the most important part of ‪#MySensoryLife‬. An advocate is only as good as their community, and I am honored to be a part of the very best one.

I love you all,

Rachel
****Shameless Self Promotion: Want to learn about SPD from a delayed-diagnosis sensory adult's perspective and hear more from yours truly? Pre-order Making Sense: A Guide to Sensory Issues today!
Posted by Rachel S. Schneider at 8:40 AM No comments:

This past weekend, I had the great honor of speaking about #MySensoryLife at SPD Parent Zone's Online Sensory Conference with some other amazing leaders of the Sensory Community 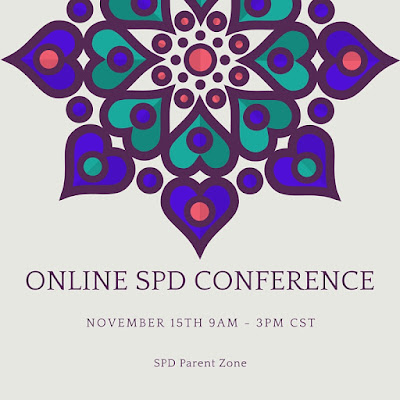 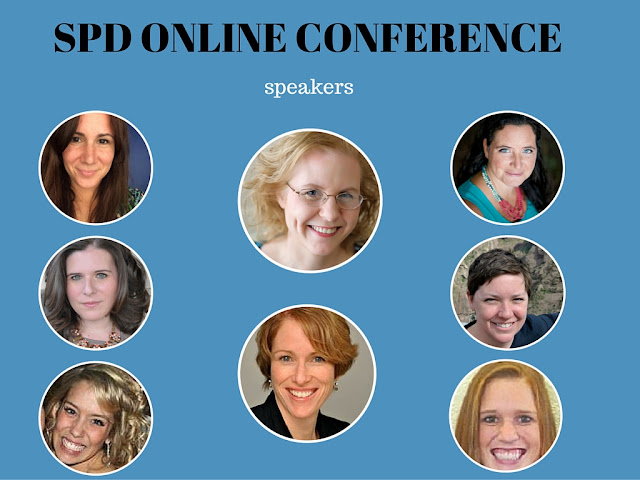 I was the first presentation of the day and I had (have) a raging, nasty cold-bug-thing (akin only to the Plague, btw), but I managed to ply my system with decongestants and still sound relatively coherent during my 45-minute slot. I spoke about my life with SPD, from my undiagnosed childhood to my first major shutdown at age 14 to misdiagnosis and therapy and SPD diagnosis and beyond. It was an incredible experience to share the things I've learned - both about myself as a sensory being and about life and attitude towards sensory challenges - with the 500+ people who signed up for the conference. And now, I'm really excited to share all of this with you!

The entire full conference, every speaker's slides and presentations and all, is available here for a $5 donation to support Chicago's First Sensory-Friendly Cultural Programming Summit in April 2016, at which I'm also speaking (click the Buy Now button towards the middle left of the page).

For those of you who just want to check out my slides presented without spoken text (which you'll probably need to understand what's going on in the slides, sorry!), they're below.

A truly wonderful experience! Thanks again to those of you who came to listen, and especially to my dear friend Kelly Jurecko of SPD Parent Zone, who continues to make all of my dreams and craziest schemes come true. 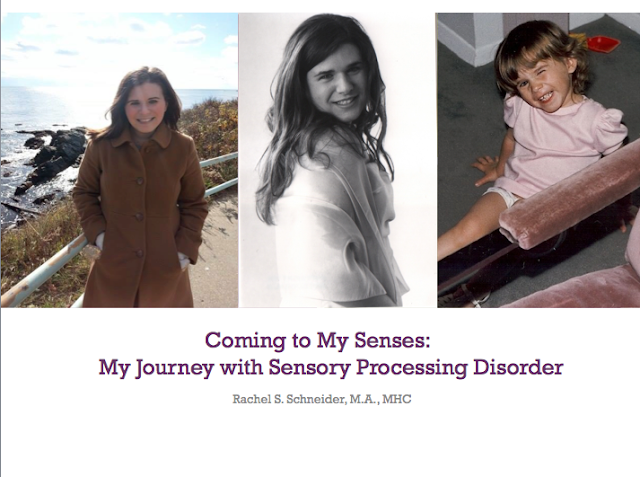 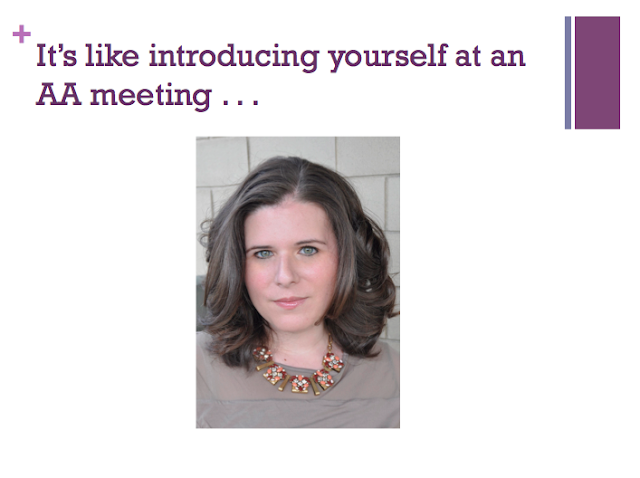 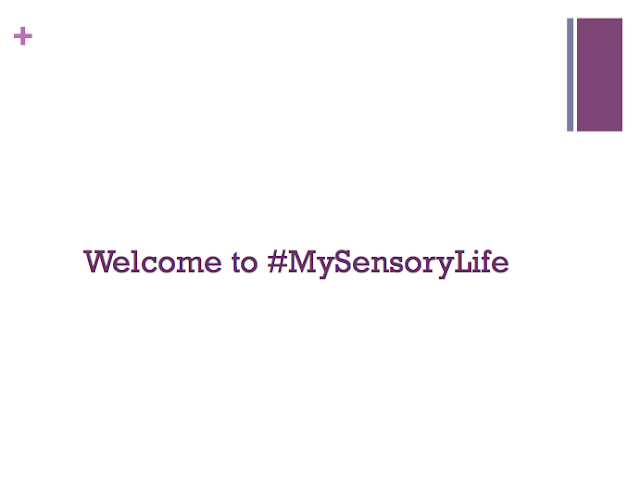 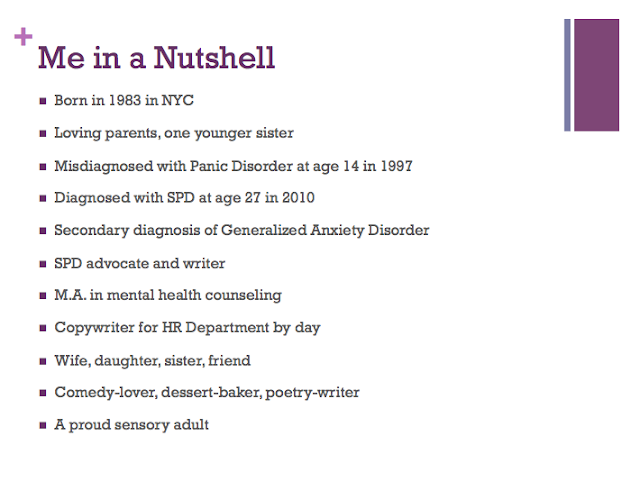 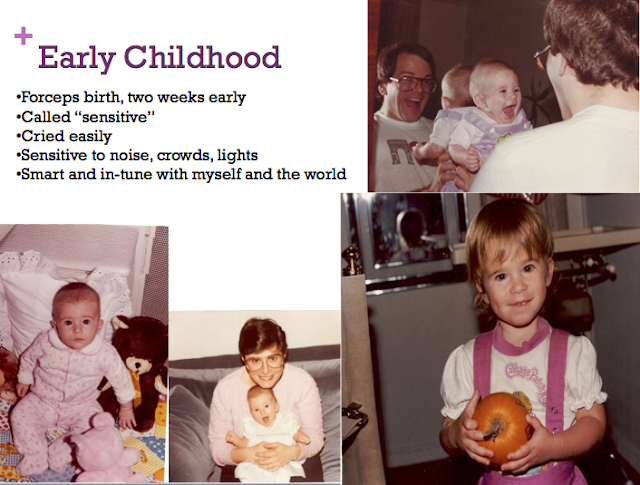 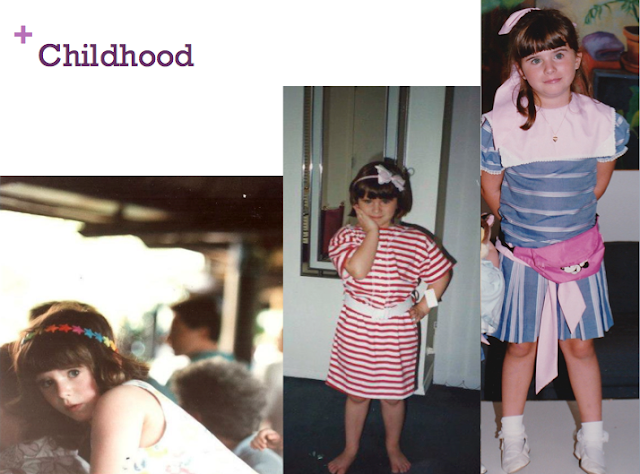 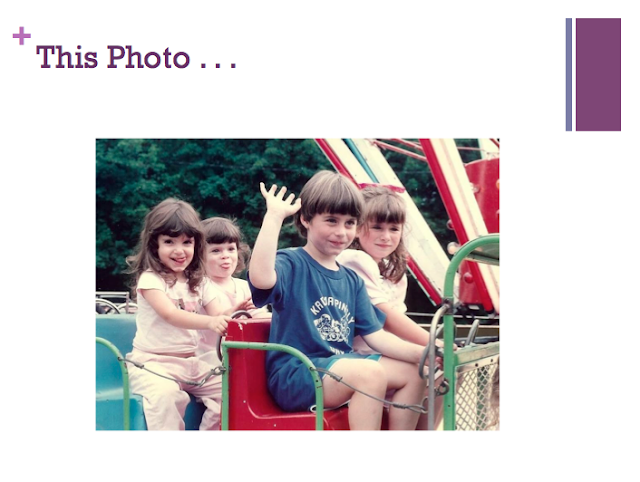 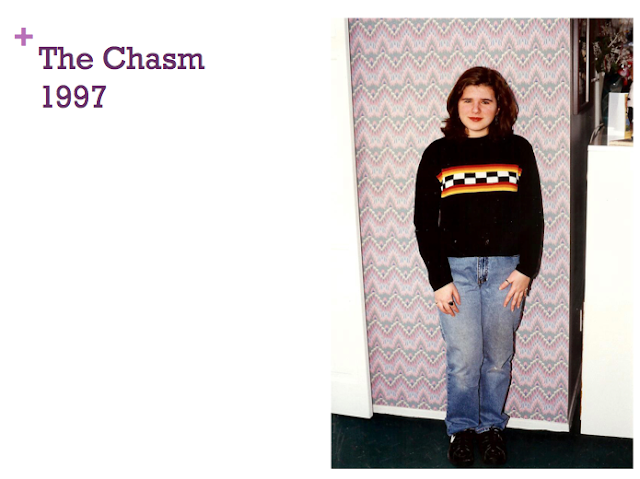 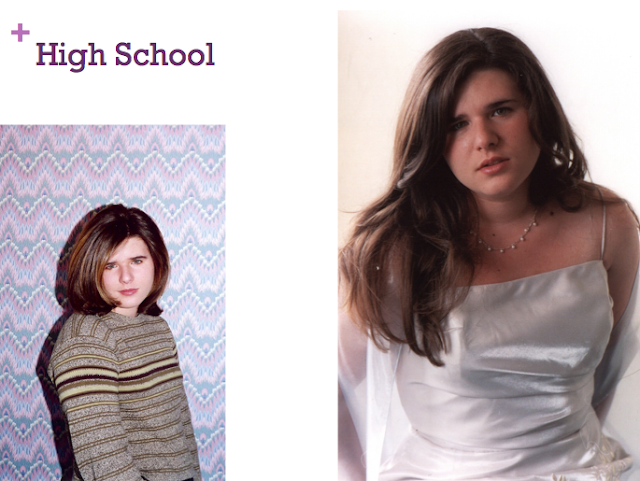 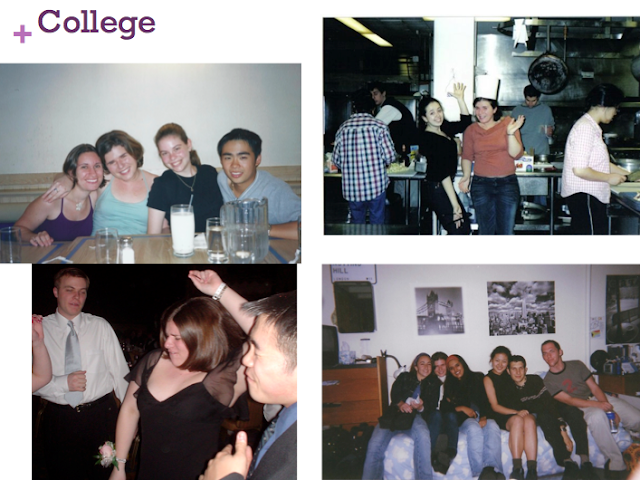 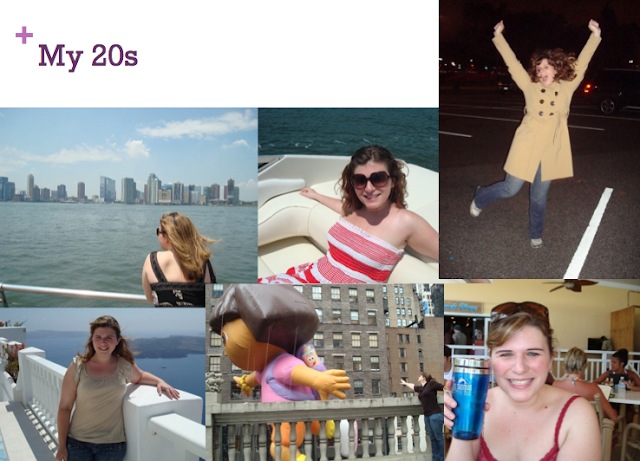 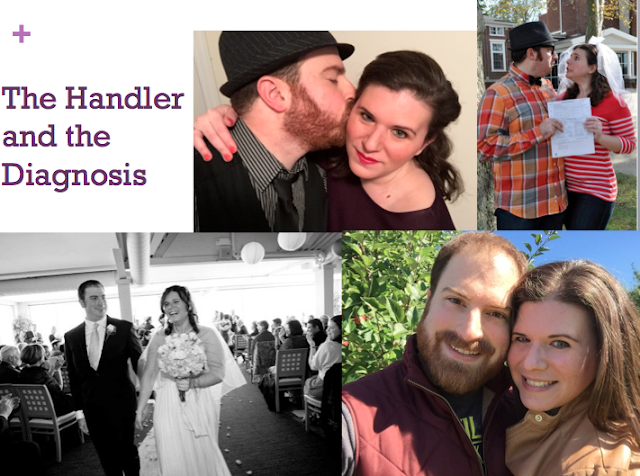 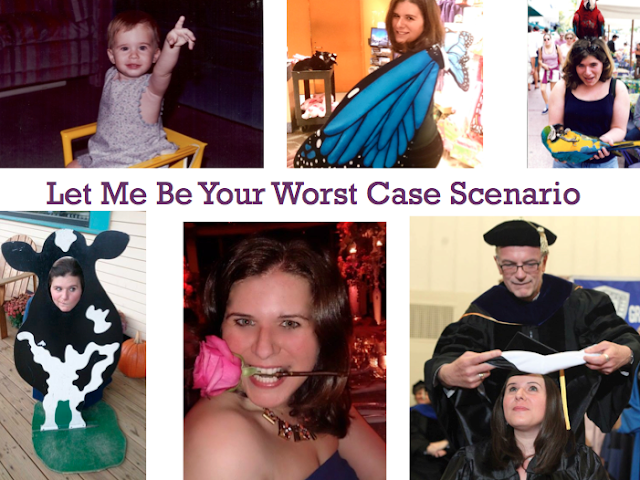 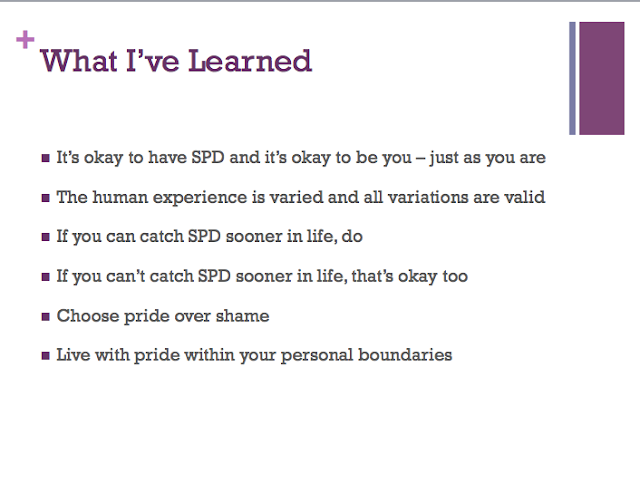 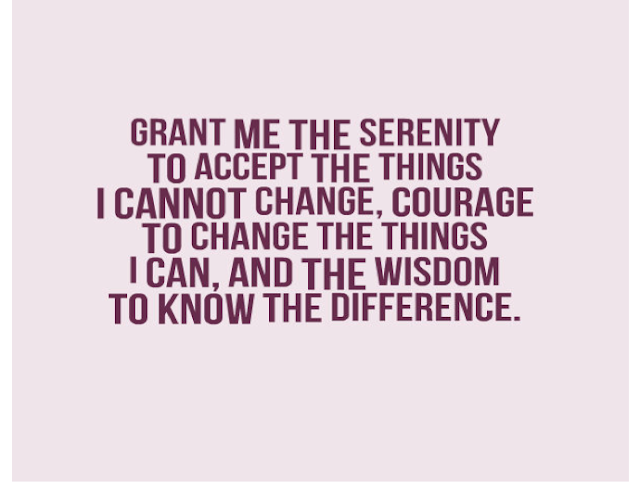 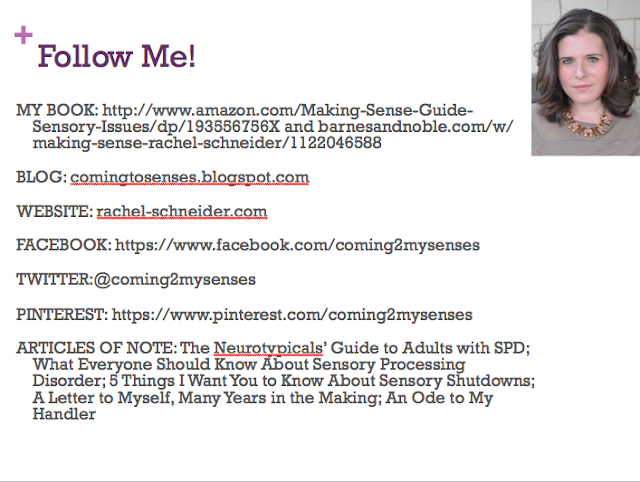 ****Shameless Self Promotion: Want to learn about SPD from a delayed-diagnosis sensory adult's perspective and hear more from yours truly? Pre-order Making Sense: A Guide to Sensory Issues today!
Posted by Rachel S. Schneider at 7:19 AM No comments:

I'm always proud to add my voice to the latest Sensory Focus Magazine, and this season's article is no exception. It's about my struggles with one of the lesser-known senses, proprioception, or where your body ends and the world begins. Where we physically exist in space is a concept that most people don't ever consider, but for some of us with SPD, it's a daily struggle to connect our body to the spatial world. We're always covered in cuts and gashes, and we wear bruises like badges of honor. 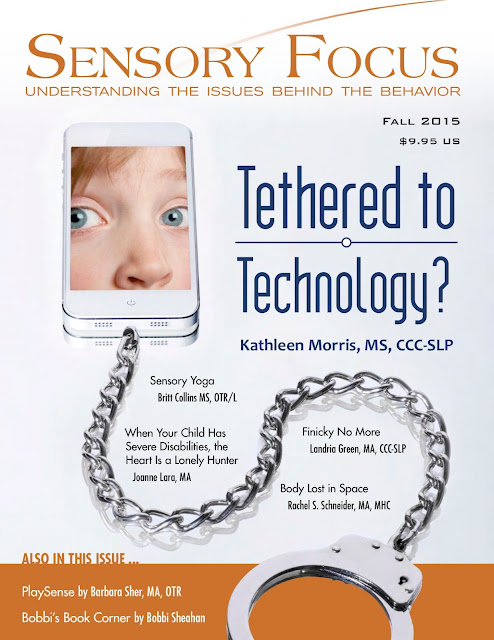 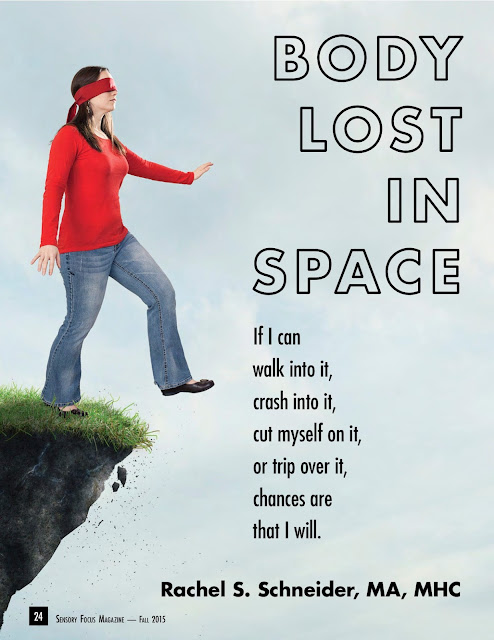 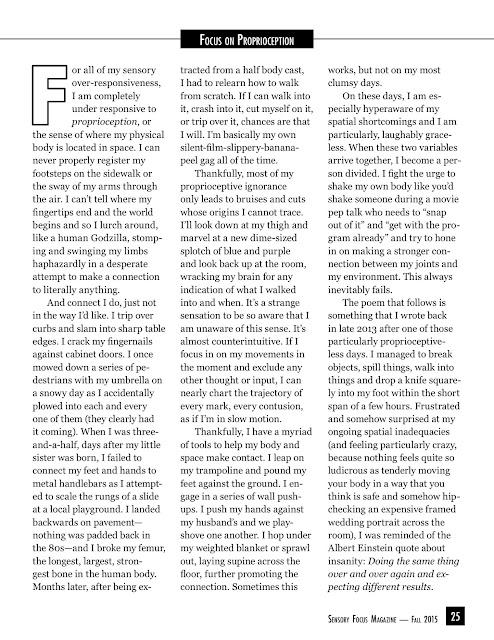 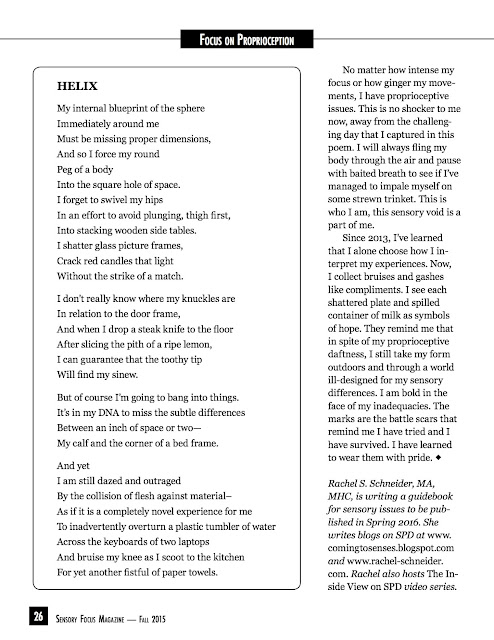 ****Shameless Self Promotion: Want to learn about SPD from a delayed-diagnosis sensory adult's perspective and hear more from yours truly? Pre-order Making Sense: A Guide to Sensory Issues today!
Posted by Rachel S. Schneider at 6:30 AM No comments:

Monday morning, as I stirred from the haze of sleep, I caught a sliver of light peeping in through the slats of our bedroom blinds. Light hasn't poured into our bedroom that early since the summer, and so for a quick second, I couldn't place the season or make sense of the time. It's chilly but it's bright but it's early. I normally don't "compute" so well first thing in the morning, especially when it comes to making sense of the sensory world around me, and I felt a gentle cascade of anxiety swell and dissipate. It felt much later than the alarm clock suggested. Much cooler out than the light implied. Where was I? What was going on? Why did life feel so wonky even before I'd even stepped out of bed?

And then I remembered. Daylight Saving Time ended on Sunday. 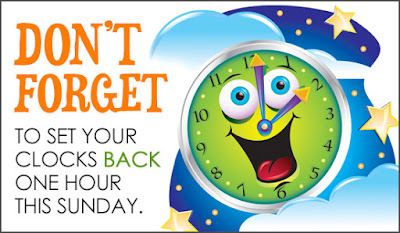 This clock is happy because he's clearly insane

I made my morning smoothie, laced up my sneakers, threw on a coat, and moved out the door for my brisk morning walk around the neighborhood. It's a brief foray into the sensory world, a mini-exposure-therapy, if you will, for a woman who works blissfully remotely, and so doesn't always have an excuse to step outside and face the intensity of the world she can't always process properly. These days, this walk is typically relatively pleasant. I watch the faces of school children, cheeks rosy from the early November wind, as they trot alongside their parents clutching backpacks. I coo at babies and smile at dogs and their owners. I don't think too much about sensory input, aside from the joys of spotting the daytime moon on a clear, blue morning.

On Monday, completely discombobulated, steps out of our apartment I smelled something old and fishy. A truck chugged by and I clamped my hands over my ears. The giggles of children whirring by on Razor scooters made me leap closer to the sides of the buildings. I fought the urge to run my fingers along the concrete and glass as I strode ever further down the street. Under my breath, I quietly cursed Presidents Wilson and Roosevelt for instituting Daylight Saving Time in the first place. 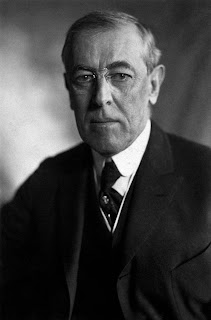 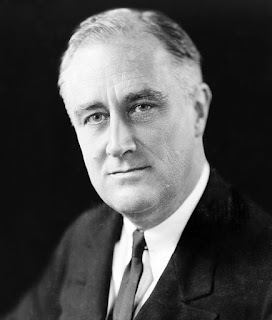 ***
The rule of thumb in the sensory community is this: if a neurotypical is struggling with something, especially with some sort of change or sensory challenge, there's a good chance a sensory person is struggling tenfold. Is the hum emanating from the airplane engine bothering you as you soar above the clouds? The person with the Sensory Modulation Disorder subtype of SPD, especially one who avoids sensory input, is probably already scaling the plastic walls and digging in their carry-on bags in search of ear protection. Do you wince as the swirl of police lights sporadically light up the night as you drive past a squad car on the highway? This same person with SPD, again an avoider, is momentarily blinded and disoriented and probably struggling to keep their car on the road to begin with. Can't quite get the hang of a dance routine or tennis with the in-laws or playing darts with the after-hours coworker crew without maiming a colleague? The person with the Sensory Based Motor Disorder subtype of SPD is probably frustrated and embarrassed, feeling clumsy and uncoordinated, making you look like Venus Williams. They may have already even given up, even as you try your damnedest to kick-ball-change.

Daylight Saving Time is miserable for neurotypicals and sensory people alike. No one likes to suddenly lose an extra hour in their day, and for those who claim that ending Daylight Saving Time means that they get to sleep even later, talk to me when your body clock has you up at an ungodly hour anyhow. Everyone - from parents to pup-owners - fight the haze and disorientation of Daylight Savings.

Now envision that you have neurological differences that make you incredibly sensitive. Imagine that you rely on certain basic, rigid patterns and routines to keep you feeling safe in a body and brain that are perpetually telling you that you're in danger. Think of the importance of sleep in this routine, of the loss of sleep leading to intense neurological episodes of tears, detachment, and anxiety where your eyes can't make sense of sight and your ears can't make sense of sound and you lose your footing in an already precarious world. Visualize your reliance on certain principles of time and space, of light and dark, of stop and go because they're not always felt internally. Picture dreading change because predictability is the only real guide you have in a world you often can't understand.

And now set the clocks back one hour and watch chaos ensue.

I'm not even sure if this post is coherent. I left my authoritative, cogent writing voice back in October, along with a sensical circadian rhythm and a watch setting that displayed the time one hour later.

Tonight, as it gets incredibly dark supremely early, I won't mind Daylight Saving for a chance few minutes. Most people in both the neurotypical and sensory communities hate when it gets dark so quickly, but I love the logical, fixed division of evening = darkness and daytime = light like the predictable, reassuring ebb and flow of the tide. I'll feel settled then for a few moments, sleepy but grounded in the cool comings-on of the evening, thick with autumn.

****Shameless Self Promotion: Want to learn about SPD from a delayed-diagnosis sensory adult's perspective and hear more from yours truly? Pre-order Making Sense: A Guide to Sensory Issues today!
Posted by Rachel S. Schneider at 5:11 AM 5 comments: