Sensory Meltdowns and Shutdowns are Not Panic Attacks

How do I know that? Because I'm having a panic attack right now . . .

Or, well, I was when I wrote the start of this post a few months ago.

My life had been turned upside-down by the person I trusted the most in this world - the one person who should've put the needs of his family above his own, as I'd always done. As we're all supposed to do. Instead, I'd woken up to the aftermath of a real-life Law and Order SVU episode. Olivia Benson, where were you when I needed you the most? That morning was also, I imagine, how it might feel to wake up to the day after a devastating natural disaster: a high magnitude earthquake, say, or ancient Pompeii the morning after the eruption of Mount Vesuvius. I'd unknowingly survived the major event - slept right through it, really - and while it felt like the earth had spun straight off its axis, the rest of the world marched calmly forward. My apartment was intact. My daughter was eating her waffle. I sat silently at our dining room table, our nanny watching me closely. The emotional debris of such destruction hit me in waves. The first wave came on with a series of new sensations. It felt like somewhere inside of me, someone was trying to smother me with a pillow. My chest felt heavy and tight. My breathing became quick. My heart ached. I kept trying to catch my breath, but instead I become overcome by heaving tears. I stepped away into the bathroom, panting and sobbing and shaking.

What it wasn't: a sensory meltdown. I've had so many of these episodes in my life.
What these feel like: sudden overwhelm by sensory stimuli - too much noise, too much movement, too much to see - and an inability to escape. Dark clouds, a flood of tears, and in time, a groggy waking up to the world as if I'd never melted down in the first place.

What it wasn't: a sensory shutdown. I've had so many of these episodes in my life too.
What these feel like: a disconnection from the body and environment, triggered by an overwhelming amount of sensory input and an inability to make sense of all of it at once. A feeling that no matter what I do, I'll be lost inside of myself forever. Passes in time in a quiet, safe space. Scarier than it sounds.

What it was: a panic attack. 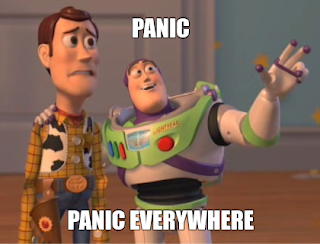 And not just a panic attack, my first-ever panic attack. In the middle of the tight-chested panting, through the pile of filth my former partner stranded me in, I somehow had the clarity of mind to think: huh. Funny. So this is a panic attack. For decades, professionals thought my sensory meltdowns and shutdowns were panic attacks and that I had Panic Disorder. It was my official diagnosis according to the gods of psychology and the authors of the DSM. I did Cognitive Behavioral Therapy, Exposure Therapy, Biofeedback - everything they could think of to reduce my panic symptoms. Except nothing really reduced these symptoms and no one could tell me why I had these "attacks" mostly in the presence of bright lights and loud sounds - and often at night. It was an ill-fitting diagnosis with symptoms that almost matched the descriptions of my experiences. Almost but not quite.

Friends, we now know I never had panic symptoms. I had undiagnosed Sensory Processing Disorder (SPD). I had my first panic attack at age 36 when my life came crashing down around me. You know, as most of us would.

The weird thing is, as uncomfortable as that panic attack was, it was NOTHING compared to the sensory challenges I've faced in my life. When the first one was over, I was like: okay, that was it? Cool, because a meltdown is way harder and a shutdown is way scarier. And maybe this isn't the case for everyone, but it was for me - even as I had panic attacks over the next few weeks that followed. The worst were the ones right before bed, when the air was still and quiet and I had to sit very much alone with the enormity of what happened to me and my daughter. The more I worked on the traumas I'd endured in September with my therapist, the better the panic attacks got, until they stopped happening altogether.

I think it's important that we work to distinguish what we're experiencing, as sensory people. Because SPD is still largely misunderstood and misdiagnosed by so many, we're quick to lump all sensory happenings into the panic attack bucket. I think it's because we're more familiar as a society with psychological terms and diagnoses and not as comfortable with neurological differences. But meltdowns, shutdowns, and panic attacks are not the same thing. Two are the result of a differently wired brain contending with a demanding sensory world. One is the result of anxiety overloading a system. Two we learn to live with because they're a part of our neurodiverse makeup. One can be helped through psychotherapy. All are difficult. All are part of the human experience as a whole. But they're not the same.

I'm not thankful for what happened here in early September. How could I be? Two weeks after that morning, I was injured in a bizarre accident involving a toddler, a forehead, and a step stool. I carry a scar above my left eye now. When I look in the mirror at that crooked red line, I remember everything: the waking up to a new role, a new me, a new life I didn't ask for or see coming. I carry all sorts of scars with me, externally and internally, as I continue to move into the future. But strangely, I'm thankful to have experienced a panic attack, if only so I could put to bed my original misdiagnosis. A strange token to pull from the mountains of rubble.
Posted by Rachel S. Schneider at 6:37 AM No comments: